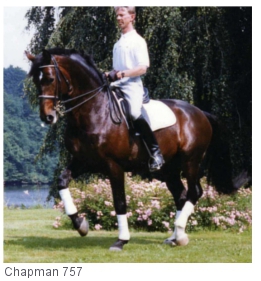 Elite stallion Chapman 757 was bred 1982 by Stellan Steinbach. Chapmans sire is Chagall 455, who is by Utrillo 432-Frondeur 333. The dame Dorina 7192 is by Dorn 314 out of Daina 6588 by Kalmuck 372-Novarro 179. Chapmans fullbrother Leroy has competed at the Olympic Games. Elise Fredriksson purchased Chapman as a yearling. Chapman was champion at his Swedish warmblood stallion performance test and received 9-10 for jumping under saddle and 40 points for his conformation. 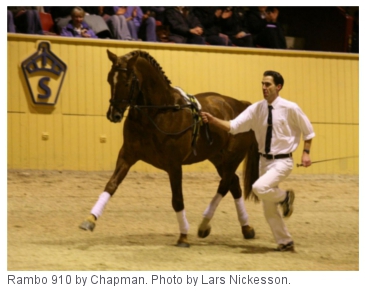 Chapman was one of Sweden´s leading breeding stallions. He is ranked in the top ten of the Swedish breeding index and has produced numerous offspring that are competing at international level for example Charlatan (Kristian von Krusenstierna), Rasputin (Mieko Yagi), Donna Prescelly (Nina Hoffman) and Ten Points (Per Sandgaard). Rasputin won the 2007 Japanese Dressage Championships.

Chapman himself was competed by Per Johansson his entire Grand Prix career and they were one of the top Swedish combinations in the ´90s. He regulary competed at the Swedish National Dressage Championships. He finished fourth at the 1992 Championships in Strömsholm, third in 1994 in Falsterbo, fifth in 1996 in Flyinge and fifth in 1998 in Strömsholm.

Chapman and Per competed at the 1994 World Equestrian Games in Hague, where they placed sith with the Swedish team. Chapman passed away in may 2006.